Give thanks to the God of gods.
His love endures forever.
(NIV)

I have tried to start this post at least three times now, but I keep getting stuck. I want to start off with some commentary about how God is The God. There is no one like Him. There is no power or authority anywhere in this universe that is anything near who He is. But what keeps throwing me off are those two words at the beginning, "Give Thanks..."

Usually when I allow my mind to delve into the bigness and the greatness and the uniqueness of God, it doesn't lead me to thankfulness. Not that it shouldn't or couldn't, but I am usually just starting to feel a little small. 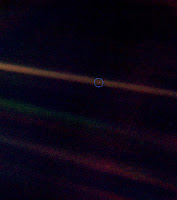 Here is a picture taken by the Voyager Spacecraft on Feb. 14, 1990. It was taken at a distance of over 4 billion miles from earth. In the picture, the blue circle that was added later is around the earth which is shown is a band of sunlight.

This picture is called the pale blue dot because one man when he saw this said something about every man who had ever lived, lived his life out on that pale blue dot. God is so big.

Notice though the end of the verse, just as the end of every verse in this amazing chapter, "...His love endures forever." As infinite as the universe is, it is NOTHING compared to the bigness of God's love! His Love is Forever!

Why should my mind go to giving thanks? This God of all gods loves even me.

Please add some additional commentary to this verse. Your input is greatly appreciated.

Popular posts from this blog

June 03, 2020
For what is our hope or joy or crown of boasting before our Lord Jesus at his coming? Is it not you?  (1 Thessalonians 2:19 -- ESV) Three things mentioned here... "hope" ... "joy" ... "crown of boasting" ...  Hope - What does Paul have his sights set on?  Joy - What is it that brings Paul joy?  Crown of Boasting - That Olympic Wreath of Glory that is placed on his head?  It is these people. It is his children in the faith. They are Paul's Hope and Joy and Crown of Glory when Jesus returns.
Post a Comment
Continue Reading »

June 04, 2020
For you are our glory and joy.  (1 Thessalonians 2:20 - ESV) Short and sweet verse at the end of chapter 2. Paul wants the new Christians in Thessalonica to know that ... in the end ... the thing that will lift him up the most and bring him the most joy
Post a Comment
Continue Reading »

June 01, 2020
But since we were torn away from you, brothers, for a short time, in person not in heart, we endeavored the more eagerly and with great desire to see you face to face, (1 Thessalonians 2:17 - ESV) "... we were torn away from you ..." If you go back to Acts 17:1-10, you can read about the quick departure from Thessalonica. But Paul wants them to know that the separation is only physical, he is still with them in heart and has a strong desire to return to them. His desire is to see them "face to face"...  What is interesting though, is that this is the first letter of Paul's. Paul has discovered a new way of ministry. Paul has had to adjust his preferred ministry, but we have all benefited from this new process of teaching to those that he cannot see face-to-face. This benefit has stretched through the centuries and has served to fulfill God's purposes of spreading the gospel to every nation on earth.
Post a Comment
Continue Reading »